Here's the final result for the example plan shown below This assignment will be worth 20% of your final grade. Hand-in will be due at the end of class 5Conversation Movie (CM) Modules 3 - 5 Using the storyboard template provided, plan and execute a short film of a conversation between two (2) characters. Scene should be no more than thirty (30) seconds long and use no more than nine (9) shots. You must at least three (3) different camera angles and shot types (wide, medium, close up etc.) Hand in will include an image of your storyboard planning, with script written below (keep it simple) and an mp4 of your finished film edited together. You can have other students act in your film and help with filming but this is not a group project. Each student must write their own script, draw their own storyboards and edit their own film. Featured principles: Posing (Solid Drawing), Staging, Appeal.What I'll be grading on this assignment:

Conversation Movie (CM). Here's a step-by-step tutorial to explain the process:1) Scout location:I'll pick the spot where I'll create the videos for my sequence. I want to choose a place nearby that I have easy access to. The natural lighting should match the tone of my scene so that I don't have to spend any extra time setting up lights. Ideally there will be minimal interference like other people, traffic, loud noises or unwanted lights. Limit your shooting to one or two locations at most: this is only a 30 sec sequence. I'm going to shoot in these two spots:

2) Write the script: Take note that the rubric only mentions the writing once (professional and appropriate language) so don't spend too much time on this. The script is just an excuse to string together a few shots into a sequence. Be sure to identify who says each line in the script. Here's my script (I use italics to note camera and actor instructions):

-start-
(Wide shot: B is facing to screen left. A stands on screen left)
A: Tell me about the 'Conversation Movie' assignment?
B: (turns to face A) Sure! Start by writing a simple script.
(cut to mid shot of A)

A: What should the script say?
(cut to mid shot of B)

B: It doesn't matter; just no swearing or unprofessional language.
(cut to original wide shot showing A and B)

A: Any other requirements?
B: You can only do nine shots and you need at least 3 of them to be different shots or camera angles. (to the audience) We've done 3 different shots already.
(cut to mid shot of A)

A: Wait; I can re-use the same camera angle?
(cut to mid shot of B)

A: Cool! (turns away) wait, is there anything else I should do? (turns back to face B at end of cut)
(cut to original wide shot showing A and B. A finishes turning in this cut)

B: Matching action across the cut or you can start a line in one location...
(cut to extra wide shot of A and B in new location)

B: ...and finish it in another!
A: Hey that was nine shots already. How long can this be?
B: Thirty seconds, which means we're almost out of time (cut to black in the middle of word time)
-end- 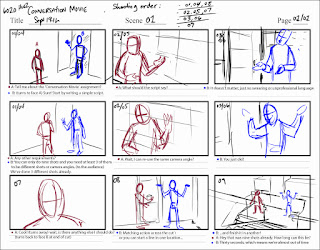 Using the same storyboard panel, I'll plan out a nine (9) shot sequence based on my script above. This will help me stay organized with things like screen position for the performers, shot composition and Maintaining continuity.

It's not by chance that almost every film production uses some type of pre-visualization to plan before they shoot the film.4) Shoot the Videos: A few basic tips here will help you get the best results:Plan carefully. A bit of time spent at the planning stages (storyboard) will make everything else go much faster.Set your camera video resolution to 1280 x 1024 or similar. Also check that your output is 30 fps. The final video will be at this resolution, so you may as well have the source footage set the same. The lower frame rate will make the files quicker and easier to handle.Follow your planning. The storyboards will help you keep on track.Be sure to get a couple of  takes for each shot. Re-shoots are time consuming so you don't want to have to come back later when you discover that a shot won't work in the editing stages.Record all the videos that have the same camera angle in one go. This will save you from having to recompose your shot again.Pay attention to the rubric and don't worry about things I won't be grading. Keep it simple. Planning should be clear and quick. Shooting the clips should be straightforward. Editing should be basic and clean.
5) Edit the sequence in Premiere:
If you're new to the software,  take advantage of the built in tutorial functions within premiere when editing your movie. Check that your final output is an efficient size. (resolution, compression, bit-rate) Here are a few helpful links to tutorials:

5 Editing Basics in Premiere Learn Editing Skills Lots of Other Premiere TutorialsHopefully when you are finished, you'll have a simple film that shows your understanding of shot selection, continuity and staging. For added fun and challenge, you can try incorporating more challenging camera angles and movements!

Welcome to my Blog